Our favorite Pittsburgh distillery (Wigle Whiskey) is now making Genever-Style Gin. What is Genever, you ask? Let’s climb into the Boozehound Way-back Machine with our new favorite in a green-glass bottle! 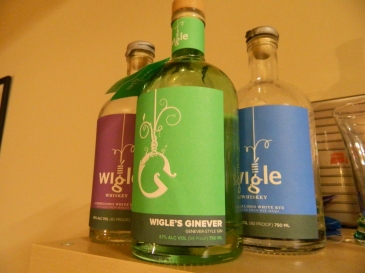 Genever (also know as Jenever, among other variations in spelling, depending on what country you’re in and your preference for g-as-in-gin over j-as-in-juniper) is the strong juniper-flavored spirit from the Netherlands that the English tried to replicate/modify and ended up with what we now know to be gin. For the cocktail seeker one of the key differences between your bottle of dry gin and genever is that genever has a much higher alcohol volume. We wouldn’t actually recommend making a martini with Wigle’s Ginever, or anyone’s genever for that matter, unless you want to be blasted. And that’s not the point of good drinking.

Wigle’s Ginever is made with a mash of barley and rye, which you’ll recognize immediately if you’ve tried their White Rye whiskey. In addition to the essential juniper, their botanicals include “earthy cardamom, peppery cubeb and fragrant lavender.” While most gins that you’re probably use to have that crisp, bright, and dry taste, Ginever has a more complex, sweet, and earthy palate. For that reason, we’ve found that it was practically made for our favorite brunch cocktail, The Bronx Cocktail, but this is Pittsburgh, so we’ll name it after Brookline.

Combine the Ginever, vermouths (Dolin if you can get it), and orange juice in a shaker with ice. Shake and strain (really strain with a cocktail sieve, because there’s pulp in there) into a cocktail glass. Use a channel knife to get a thin, long slice of the orange peel with as little pith (the white stuff) as possible, for garnish. Use a larger slice of peel and run it along the rim of the glass (or if you’re lazy like me, use the strip you just cut into the orange as a guide and run the actual orange over the glass – you’ll still get some of the tasty orange oils).

Ginever also goes well in a Gin Rickey and a Martinez (as well as other “classic” martinis that use more vermouth than normal). Wigle also has some great suggestions, like using it in place of regular gin in a Tom Collins, mixing it with Ginger Beer, and others. We have some excellent bartenders here in Pittsburgh, and they’ve all been eager to help Wigle gain ground by bringing them into our favorite bars (Legume, and any place run by Kevin Sousa, among others) and doing fantastic things with them.

As always, we can’t wait to see what Wigle’s going to do next and what awesome packaging they’ll have. Talk about amazing brand consistency and attractive labels.