We booze nerds sometimes get carried away by the details of a drink’s flavor, debating the merits of finishing casks, whether vodka can or even should have terrior, and other such minutia that so quickly seem vastly important. But one thing that is often overlooked, and quite unfairly so, is aroma. A drink should stimulate at lease four of your five senses with flavor, mouthfeel, appearance, and aroma. I even enjoy the rhythm of a skillfully shaken cocktail.

Since we are only days away from that auspicious American tradition, the Kentucky Derby, we thought that this would be a perfect opportunity to highlight one of the great aromatic cocktails, the Mint Julep. The julep is a profoundly simple drink to make and yields a wonderfully delicious refreshment.

Seen above is a traditional julep glass. While not necessary to enjoy a Mint Julep, it does help inflate your feeling of American bourgeois sophistication.

While Mint Juleps have been made with a variety of spirits in the past, Kentucky bourbon has been the standard for nearly a century. Additionally, some recipes will tell you to muddle your mint in the bottom of the glass, however this destroys the drink’s aromatic qualities and yields a sub-par cocktail. Instead, let your mint leaves float on the top of your Mint Julep and as you sip, breathe in with your nose. This way, the scent of the mint intermingles with the flavor of the bourbon as you drink.

Fill your glass (or silver julep cup) to the top with crushed ice. Pour over this your simple syrup, then bourbon. Stir until your ingredients are well mixed and a fog begins to accumulate on the outside of your glass (or ice on your julep cup). Garnish with mint and serve.

Traditional julep cups are made of silver so that as you mix, a thin film of ice should accumulate on the outside of your cup. This keeps your drink colder longer on a hot Kentucky afternoon. But for those not born with a silver cup in your mouth, a julep glass like the one shown above is also a great way to serve this drink. 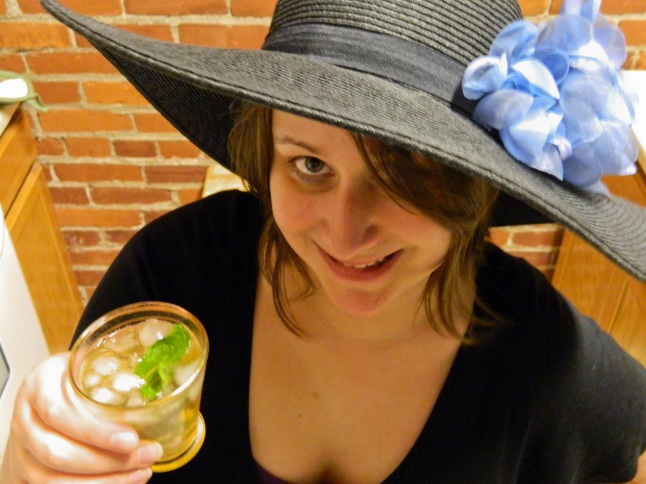 Why I do declare.

At long last Mad Men is back! A couple episodes into the new season and we’re as happy as Roger Sterling in a pool full of Stolichnaya, which is why we’re taking this opportunity to bend the rules on our Film Friday series. So sure, Mad Men isn’t a film, but after 4 seasons the character development is outstanding, the writing is absolutely on point, and the editing and camerawork are downright cinematic. Besides, it’s our blog and we’ll do what we want.

So suppose for a moment that for the past five years you’ve been consciously avoiding AMC and shunning their programming lineup. Maybe you’re under the impression that this “Mad Men” thing that people keep talking about is some gruesome spinoff of Angry Birds. But now you’ve seen the light. You read something online that changed your mind, or that cute girl at work was talking about the show, or maybe your friends and family staged an intervention, because they love you and want you to be happy with your television choices. Anyway, you’ve decided that you need to start watching this Mad Men show and through the miracle of Netflix you can start right from the beginning.

While I wouldn’t recommend going drink for drink with the characters onscreen, we find that the show’s more enjoyable with a strong drink in hand. As such, here’s a guide drinking along with Mad Men, season by season.

Still steeped in the glamor and buttoned-up culture of the 1950’s, the first season of Mad Men begins in 1960 – the Drapers and the Sterlings sip traditional alcohol-heavy drinks in their favorite clubs, at home, and at work. More importantly, these period-appropriate cocktails will sooth the shock of some characters’ blatant sexism. But as the final scene of season 1 implies, the shows writers have a higher opinion of the female characters than do many of the male characters.

Season 2: Cuba Libres and Heineken with a side of Utz potato chips

I must admit, that of the four full seasons so far, season 2 is my least favorite. However, 3 & 4 more than make up for it and there are important plot points in season 2 that will be important later on. We went with Heineken and Utz for this season because both brands are featured as clients of the Sterling Cooper ad agency. But with the Cuban missile crisis looming at the end of the season, we figured the politically pertinent Cuba Libre would make a good fit.

Season 3 is back on track with quality writing, compelling stories, and masterful filmmaking. This season is one of triumph, tragedy and strife, which made our selections more difficult. There is a birth and a death, which led us to the French 75. A celebratory drink, the French 75 is champagne-based, but also takes its name from a First World War artillery gun. And in episode 6 an altercation with a lawnmower inspired the selection of the Old Fashioned, a somewhat gory muddled drink.

We figure that if you’ve gotten this far you’ve probably missed some sleep, so wake yourself up with an Irish Coffee and soldier on. You’re on the home stretch. Once you’re awake, switch to the Dempsey Cocktail (which we’ll be posting in a few days). Named for the legendary boxer Jack Dempsey, this drink fits in with season 4’s combative themes. As Don battles with Betty and Sterling Cooper Draper Price go head-to-head with a rival agency, we see the characters at their best and at their worst. In fact, in one of the show’s many examples of highlighting historical context, episode 7 takes place the same night as Muhammad Ali’s second match-up against Sonny Liston.

Season 5 is off to a good start and we’re super excited to have new episodes to look forward to. As the season progresses, leave us suggestions in the comments as to what your drink of choice is for this season.

In our earlier article, The History of Absinthe, we touched briefly on the long-held belief that absinthe – and specifically the wormwood in it – taken in significant quantity will cause a drinker to go insane. This belief was one of the major motivating factors that led to a nearly century-long ban on absinthe in the US and much of Europe. In fact, the notion that absinthe causes hallucinations persists in pop culture and the public consciousness to this day, and is often played for humor in film and television.

END_OF_DOCUMENT_TOKEN_TO_BE_REPLACED

Proof that the social scare film is as old as the cinema itself, Absinthe is the 1913 equivalent of Reefer Madness. The titles here are not in English, but it’s a silent film so you shouldn’t need them to follow the story anyway. Note that the main character is an artist with a particularly goofy beret. It is a testament to the social scare film’s habitual oversimplification that within days of his first sip of absinthe, the artist’s life has fallen apart completely; and within moments of giving up the drink, his life is put back together.

Absinthe is interesting both to enthusiasts of silent cinema and as an example of society’s attitude towards absinthe as La Belle Époque drew to a close.

There are a lot of drinks in the world. From British best bitter to choujiu (Chinese rice wine), everywhere human beings have put down roots, you’ll find some sort of booze. And of all the beverages that have ever passed human lips, perhaps the most infamous is absinthe. This bright green spirit can boast the king of bad reputations, so much so that it was demonized and banned in several western countries for nearly a century. But what led to such drastic actions? What had influenced public opinion so dramatically against absinthe? This is a question that has been neglected, perhaps intentionally, for quite a long time; and to do it justice – unfortunately – requires quite a long answer.

An amateur preparing a dram of absinthe.

END_OF_DOCUMENT_TOKEN_TO_BE_REPLACED

We’ve seen some recipes that call for bourbon, but for historical accuracy nothing but rye will do. Also, if you have it on hand, always opt for Peychaud’s bitters.

To kick off absinthe week, we put together this quick little video sip walking you through the traditional preparation harkening back to the 19th century and La Belle Epoque.

Eagle-eyed viewers will notice that I got a haircut between shoots.

Named for a political district in Boston, this drink was invented to celebrate the election of Martin Lomasney, nicknamed the Czar of Ward 8, to the state legislature. It’s easy to suspect, though, that the bartender at the Locke-Ober restaurant where the drink was invented, may not have meant the gesture as a compliment. Like many bosses of turn of the century political machines, Lomasney was a notoriously dirty politician, and an ardent teetotaler.

Sipping a Ward 8 is like a contest between sweet and tart as the lemon juice and grenadine vie for attention. True to history, this cocktail is an excellent bracer to get you through yet another election year.

Combine all ingredients in a shaker half filled with ice. Shake thoroughly and strain into a chilled cocktail glass.

Toast to your candidate with a Ward 8!

One of the happy side effects of the recent enthusiasm for classic cocktails is the accompanying enthusiasm for classic cocktail ingredients. In addition to the rise of micro-distilleries producing small-batch gin, whiskey, and vodka, there is increased attention being paid to the other ingredients as well. New brands of bitters like Hella Bitter and The Bitter Truth are popping up every month it seems, and Art in the Age has released Root, Snap, and Rhuby liqueurs (root beer, ginger, and rhubarb flavored, respectively) that are opening new doors for a world of original cocktails. Seeing as maraschino liqueur is one of the great classic cocktail ingredients – once appreciated by rulers and conquerors along with 20th century barmen – it seems only a matter of time before some Brooklyn or San Francisco-based upstart does something creative and wonderful with it. So to beat the rush, let’s cover the basics.

END_OF_DOCUMENT_TOKEN_TO_BE_REPLACED

Some of our regular readers, and especially those who follow us on Facebook and Twitter, will no doubt have picked up on our poorly concealed secret project. For the past several months we’ve been putting together the very first I Prefer the Term Boozehound video episode, and we’re finally ready to share it with you. Episode 1 features a beer tasting with Shanna, mixing a Bronx cocktail with Matt, and an interview with Whiskey Daisy & Stella Can-Can from the Ladies United for the Preservation of Endangered Cocktails.

We learned a lot making this episode, and we’ve definitely got a lot to improve on for Episode 2. But rest assured that Episode 2 is coming, and hopefully not far off.

Also, be sure to watch all the way to end for an added bonus.

I Prefer the Term Boozehound
Blog at WordPress.com.
Loading Comments...